An Education Over Pancakes With Local Politician Alan Miller

I met Bob Kuehner, owner of School for Amazing Kids, while pouring coffee and serving pancakes at the Shelby Iron Works Pancake breakfast on January 4th.  Bob had brought his eight grandkids with him to the breakfast and he asked me to answer some questions about my campaign for District Court Judge in Shelby County. 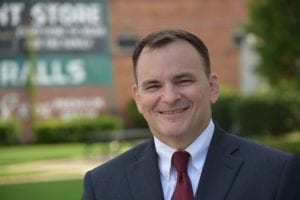 Initially, I thought Bob just wanted to learn more about my reasons for running for office – but his primary concern was educating his grandchildren about the office I was running for. He and the kids had some great questions for me and I appreciated the opportunity to share the importance of the office of District Court Judge with them.

What does District Court Judge do?

As it stands right now, the District Court Judge (Place 2) is responsible for traffic cases, preliminary hearings to determine whether or not probable cause exists to support a charge in felony criminal cases, probation violations and some small claims cases. That sounds like a lot, but the numbers can be deceiving. A vast majority of traffic cases, for example, are paid through a website and require almost no effort from the judge. Similarly, the other assignments are very much process-driven and also require very little work on the part of the judge.

So why am I running?  Because the job needs to be bigger than it currently is.

We can’t afford to have one position with very little judicial work to do while our other courts—particularly the juvenile court which has a direct impact on the well-being of families and children—struggle with an overwhelming caseload.  Those cases are important and cannot be handled with simple processes or the push of a button on a computer. We need a District Court Judge with the experience and the willingness to contribute time and effort to other judges and help clear the overwhelming caseload.

The kids’ questions lead to a broader conversation about the design of our criminal justice system, the importance of juries and the role of the judge during the jury trial process.  It was a great opportunity for me to talk about the Judeo-Christian foundation of our founding documents and the genius design of our Constitution and the protections that it provides us as citizens.  It is vitally important that our children learn about and understand the importance of the balance of powers established by our Founding Fathers. We have seen the Separation of Powers violated by judges who legislate from the bench and by a Congress that abuses the impeachment process for political purposes.  Educating our children about the proper roles of the Judicial, Legislative, and Executive branches of our government will allow them to know when these kinds of abuses are occurring and to demand better from their elected leaders when they are old enough to vote.

Finally, Bob asked me about the most difficult or challenging part of the job.  After taking a few moments to think about the question, my response was, “Sentencing.”  As District Court Judge, I will have to ratify plea agreements between prosecutors and defense attorneys or impose punishments after presiding over a trial. It is the balancing of incapacitation (to protect other people); rehabilitation (using education and treatment programs to change offender behavior); retribution (to show society and the victim’s family that the offender has been forced to pay for their actions); and deterrence (to prevent the offender re-offending and demonstrate to society the consequences of similar actions), that make this particularly challenging.  Nevertheless, public safety must be our primary concern. If we can use rehabilitation efforts to keep offenders from returning to the criminal justice system, then we should.  But once an offender has shown us that he or she cannot be trusted to handle their liberty without breaking our laws, incapacitation by incarceration must be the response.

Answering questions for the kids was a unique opportunity for me to re-focus on the most fundamental principles of our justice system and I thoroughly enjoyed having the opportunity to answer their questions. was encouraged to see Bob engaging with young children about the design of our government, the importance of civic duty and the Judeo-Christian foundation of our legal system.

This is vitally important because our way of life is under attack by political cronyism like never before in the United States. There are things being said by our country’s current leaders and those aspiring to leadership on both sides of the aisle that I never thought I would hear spoken by any person in or seeking political office. Now more than ever, it is important that we get out and VOTE! We cannot sit back and just assume that the nation our Founding Fathers established and that so many have fought and died for will stand on its own without our duty.  Our freedom means nothing if we aren’t willing to exercise it.

Alan Miller has recently served as the Chief Assistant District Attorney for Shelby County, and has previously served as the Director of COMPACT 2020, a ground breaking drug enforcement and prevention effort aimed at combining the efforts of law enforcement, the courts, and the local communities in order to enhance prevention efforts in Shelby County.

Alan is a graduate of The University of Alabama School of Law, and was employed with the Shelby County District Attorney’s Office from October, 2003 to August, 2019 when he stepped down in order to run for District Court Judge.

Alan also serves as a Lieutenant Colonel in the United States Marine Corps Reserve, and was twice deployed in support of Operation Iraqi Freedom in 2004 and again in 2008. Recent deployments with the Marine Corps include exercises in Jordan and the Republic of Korea.

Alan and his family reside in Chelsea, Alabama, where they have lived since 2003.

The staff is amazing……

My daughter loves going here. The staff is amazing and they are always polite and friendly.

— David G.
View the Rest of our References